Environmental Art and Green Economy at COP23 in Bonn 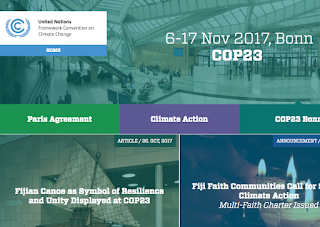 Environment Europe Ltd is very pleased to announce a Green Economy and Environmental Art focused session at the forthcoming UNFCCC COP23 meeting in Bonn to take place at 15:00 November 17th, [2017] in the Press Conference Room 2 in the Bula Zone.

Environmental art could be a new language to reach the hearts and minds of wider public on the most important issues our planet is facing. The “Magical Realism” series to be exhibited at the forthcoming United Nations UNFCCC COP23 meeting in Bonn is drawing our attention to the importance of ecosystems in everything we do. 'Magical realism' series depicts ecologically sensitive and often protected areas in Latin America. Through his work with International Union for Conservation of Nature, the artist developed a new approach to assess the value of ecosystems, highlighting social, ecological and economic dimensions. By capturing unique and meditative landscapes in most exotic locations, the artist aims to communicate the fragile beauty of nature, something money can’t buy. Ecosystems support life on this planet, regulating water cycles, generating oxygen, capturing CO2, absorbing dust, purifying water and processing organic waste. Ecosystems need to be restored and preserved for other reasons other than economic. What is required seems to be a paradigm shift in economic thinking, that could be inspired by ecological economics, a new interdisciplinary field.

The new series from Colombia, one of the world’s “megadiverse” countries, hosting close to 10% of the planet’s biodiversity according to the Convention on Biological Diversity, includes travel notes from high altitude wax palm forest 'El Bosque la Samaria', a charming coffee-producing town of Salamina, Colombian humming birds, Sumapaz Paramo National Park, the beautiful and colourful Cartagena de Indias, the ancient Spanish port city, which saw violent pirate attacks from Francis Drake, and, finally, Tayrona National Park on the Caribbean coast, where fresh jaguar footprints were found on one of the beaches. A small selection of images from this series, made using Hasselblad medium format film camera and Fuji film will be exhibited at the forthcoming United Nations COP23 meeting in Bonn.

Environmental art can be a powerful language to attract attention to the world’s most important problems: climate change, biodiversity loss, plastics pollution in our oceans, the impact our production activities have on this planet. Following in the footsteps of great environmental artists: Sebastiao Salgado, Edward Burtynsky, James Balog, David Maisel and Yann Arthus-Bertrand, Dr Stanislav Shmelev trying to address the issues the world is facing not just through the language of science but the language of art. Engaging the audience’s emotional intelligence and the art historical connotations, his works are aiming to make people pause and think. The most interested viewer could of course read the volumes of theory that Dr Shmelev has edited and written. One of them is called ‘Ecological Economics: Sustainability in Practice’ (2012) and has become a bestseller with over 26000 downloads. The executive education Summer and Winter Schools in Ecological Economics which Dr Shmelev has initiated and run are focusing on inspiring change for sustainability and have already been attended by participants from 52 countries.

The forthcoming session to take place on the 17th of November 2017 will also be a cause for celebration of a new collaborative book that Dr Shmelev has edited. It is entitled 'Green Economy Reader' and is a collection of though provoking articles by the leading sustainability thinkers of our time. State of the art in sustainability thinking, inspired by interdisciplinary ideas of ecological economics, this book is focusing on sustainability pathways, new economic theory, democracy and institutions, multidimensional assessment of sustainability, macroeconomic modelling and policies, climate change and renewable energy, resource flows and circular economy, regenerative cities, environmental conflicts and values. It will be helpful for MSc and PhD students in Economics, Management, Environmental Change, Ecological Economics, Development Economics, Sustainability and practitioners in business, international and nongovernmental organizations, such as UNDP, UNEP, IUCN, OECD. Rich, diverse and thought provoking collection of top level contributions, it will help to facilitate the transition towards sustainability and educational reform.

This is what the endorsements read:


The book could be found on Amazon: https://www.amazon.co.uk/Green-Economy-Reader-Ecological-Sustainability/dp/3319389173/

Press inquiries regarding the forthcoming presentation at UNFCCC COP23 meeting in Bonn should be directed to director@environmenteurope.org

Dr Stanislav Shmelev is an award winning British photographer, painter, and ecological economist. Holding PhD in Ecological Economics (2003), a LEAD Europe Fellowship (2007) and named on of top four most promising young economists in the world by the Handelsblatt Newspaper.

Stanislav combines his interest in fine art and sustainability and expresses his admiration for the natural world through oil paintings and photographs, printed on aluminium plates. Passionate about green economy, nature protection and sensitive ecosystems, Stanislav creates evocative environmental landscapes inspired by his travels in Brazil, Colombia, Malaysia, UK, France and the countries of the Mediterranean. Formerly a member of the IUCN World Commission on Protected Areas, Senior Researcher at the Oxford University, and Visiting Professor at Universities of Geneva, Paris and Versailles.

Stanislav is an author ‘Ecological Economics: Sustainability in Practice’ (Springer, 2012) and author and editor of 'Green Economy Reader' (Springer, 2017) and 'Sustainability Analysis: An Interdisciplinary Approach' (Palgrave, 2012). His image ‘Complex Systems. Dorset’ is published by National Geographic in an edited volume.