This post is a running list of recent book recommendations from ArtSciConverge participants that explore the art/sci interface in the natural world. There is also a good list of related books on the "SciArt in America" blog.

I created a list on Amazon with additional titles that may be interesting.

Arts Programming for the Anthropocene: Art in Community and Environment, Bill Gilbert and Annica Cox.

Arts Programming for the Anthropocene argues for a role for the arts as an engaged, professional practice in contemporary culture, charting the evolution of arts over the previous half century from a primarily solitary practice involved with its own internal dialogue to one actively seeking a larger discourse. The chapters investigate the origin and evolution of five academic field programs on three continents, mapping developments in field pedagogy in the arts over the past twenty years.

Drawing upon the collective experience of artists and academicians in the United States, Australia, and Greece operating in a wide range of social and environmental contexts, it makes the case for the necessity of an update to ensure the real world relevance and applicability of tertiary arts education. Based on thirty years of experimentation in arts pedagogy, including the creation of the Land Arts of the American West (LAAW) program and Art and Ecology discipline at the University of New Mexico, this book is written for arts practitioners, aspiring artists, art educators, and those interested in how the arts can contribute to strengthening cultural resiliency in the face of rapid environmental change.

"...in The Science of Interstellar, Kip Thorne, the Nobel prize-winning physicist who assisted Nolan on the scientific aspects of Interstellar, shows us that the movie’s jaw-dropping events and stunning, never-before-attempted visuals are grounded in real science. Thorne shares his experiences working as the science adviser on the film and then moves on to the science itself. In chapters on wormholes, black holes, interstellar travel, and much more, Thorne’s scientific insights―many of them triggered during the actual scripting and shooting of Interstellar―describe the physical laws that govern our universe and the truly astounding phenomena that those laws make possible."

SILENT SPRING IS MORE THAN A SCIENTIFIC LANDMARK: IT’S LITERATURE
On the under-rated poetry of Rachel Carson's masterpiece.


"Carson accomplished the feat of raising a public outcry against DDT not just with her research on its deleterious effects, but with the descriptive imagery, strong rhetoric, and poetic language that lift Silent Spring into the realm of other great works of American literature."

"Carson’s book Silent Spring, published in 1962, created a widespread shift in how the general population perceived the effects of human impact on the natural environment. Her writing combined scientific studies and research, with anecdotes from American house wives about dead birds and squirrels, to create a scathing argument against the negative impacts of chemical pesticide use, specifically DDT, in the post-war period. Silent Spring became a bestseller and went on to bolster the environmental conservation movement prompting significant U.S. government policy changes banning the use of DDT.

Silent Spring was not Carson’s first book. Her three previous titles dealt with the wonders of the sea. The NY Times reports: 'Carson believed that people would protect only what they loved, so she worked to establish a “sense of wonder” about nature. In her best-selling sea books — The Sea Around Us, The Edge of the Sea, and Under the Sea-Wind — she used simple and sometimes sentimental narratives about the oceans to articulate sophisticated ideas about the inner workings of largely unseen things.'"

"In this exquisitely researched work of fiction, Sylvia Torti explores sex and science, memory and forgetting, and how, in laboratory research on living organisms, we often destroy what we love.”--Sy Montgomery, author of The Soul of an Octopus, finalist for The National Book Award.

The term “PARANOMIA” has multiple meanings, one of them being that which exists alongside the normative. In his inquiry into the entangled aspects of science and contemporary art, Christoph Keller outlines how knowledge is derived in the respective fields.


The Time of the Force Majeure: After 45 Years, Counterforce is on the Horizon

This book offers a 21st-century manifesto from the pioneers of the eco-art movement. Since the 1970s Helen and Newton Harrison have been creating art inspired by the earth. They established a worldwide network among biologists, ecologists, architects, urban planners, politicians, and other artists to initiate collaborative dialogues about ideas and solutions which support biodiversity and community development. This definitive survey traces an influential joint career that has lasted nearly half a century. Vladimir Nabokov's career in science, included "a stint as the lepidoptery curator at Harvard University’s Museum of Comparative Zoology in the 1940s...his scientific work has mostly been treated as a curious fact rather than something of a significance on par with his writing. Fine Lines: Vladimir Nabokov’s Scientific Art, edited by Stephen H. Blackwell and Kurt Johnson and released earlier this year by Yale University Press, is one of the first works to thoroughly investigate his butterfly studies and scientific illustrations."


That Nabokov showed such insight despite working with such apparently limited tools at his disposal argues that he was more than just a competent taxonomist. His work in the Neotropical Polyommatus Blues stands out as a bold and brilliant scientific advance.

"Using the arts for conservation can help attract new audiences, increase understanding, introduce new perspectives, and create a dialogue among diverse people. The arts — painting, photography, literature, theatre, and music — offer an emotional connection to nature. This chapter provides examples of using the arts to inspire people to take action. Planning art activities requires reaching out to artists and the art community, audiences with whom scientists and educators may seldom interact. Conservation problems require creative solutions. It makes sense to access more ways of knowing the world in order to take care of it." -- Oxford Press


"Herman convincingly argues that closely analyzing works of art is an empowering exercise that translates to seeing the 'hidden' clues in many real-life scenarios...

Yet despite her expert clientele, Herman amply demonstrates that tapping into an inner Sherlock Holmes isn't only a skill for investigators and that heightened observation is critical to communicating effectively, empathizing with others, and making informed decisions." -- Amazon.com


"This anthology―which includes work by some of the nation's most accomplished writers, including Sandra Alcosser, Alison Hawthorne Deming, Jane Hirshfield, Linda Hogan, Freeman House, Robin Wall Kimmerer, Kathleen Dean Moore, Robert Michael Pyle, Pattiann Rogers, and Scott Russell Sanders―grows out of the work of the Long-Term Ecological Reflections program and showcases the insights of the program's thoughtful and important encounters among writers, scientists, and place.

These vivid essays, poems, and field notes convey a landscape of moss-draped trees, patchwork clear-cuts, stream-swept gravel bars, and hillsides scoured by fire, and also bring forward the ambiguities and paradoxes of conflicting human values and their implications for the ecosystem.

Forest Under Story offers an illuminating and multifaceted way of understanding the ecology and significance of old-growth forests, and points the way toward a new kind of collaboration between the sciences and the humanities to better know and learn from special places." -- Amazon.com


"Why do we covet beauty? Why does art, which seems to serve little practical purpose, feel fundamental to our lives?

Such questions have long fascinated philosophers and artists. Now neuroscientists are weighing in as well. The Aesthetic Brain explores the field of neuroaesthetics, the science of how our brain experiences and responds to art, music and objects of beauty. Chatterjee, a neuroscientist, argues that an instinct for beauty has helped our species endure. Art is a product of our quest for beauty and knowledge." -- Scientific American


Experiencing Art: In the Brain of the Beholder

"Shimamura has written the ideal introduction to what science can say about artworks, from prehistoric carvings to the latest video projections. It's readable, smart and informed. Better yet, it's a scientist's take that doesn't neglect the humanities: Shimamura cares about which neurons fire, but also about what Plato thought." 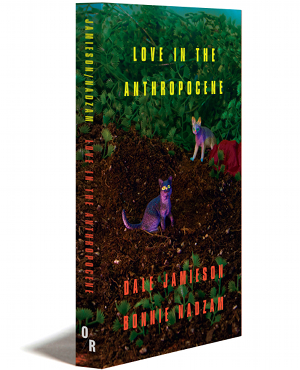 12-7-15: "An audacious collaboration between an award-winning novelist and a leading environmental philosopher, Love in the Anthropocene taps into one of the hottest topics of the day, literally and figuratively—our corrupted environment—to deliver five related stories (“Flyfishing,” “Carbon,” “Holiday,” “Shanghai,” and “Zoo”) that investigate a future bereft of natural environments, introduced with a discussion on the Anthropocene—the Age of Humanity—and concluding with an essay on love.

The “love” these writer/philosophers investigate and celebrate is as much a constant as is human despoliation of the planet; it is what defines us, and it is what may save us. Science fiction, literary fiction, philosophical meditation, manifesto? All the above. This unique work is destined to become an essential companion—a primer, really—to life in the 21st century."
Posted by Faerthen Felix at 11:23 AM